well as you can tell from the LONG time off I took there hasn’t been anything new and I’m sure that a majority of my regular readers (if I had any) have all left and gone on to read other blogs that actually update more than every quarter of a year.  However, school took a priority and it got really busy there for a while, but now I’m glad to say that I am back at least for a decent amount of time.

My post tonight is going to talk about the pricing of DVD’s of anime.  How much do you as a consumer really think an episode of anime is worth?  Do you think that what the companies such as Funimation and Bandai are charging are fair prices overall?

I know that many people will ask you that it depends on which series it is because everyone likes different series.  My two favorite series are Elfen Lied and Maria Sama Ga Miteru two series which are completely different from each other and I would actually pay quite a bit more than a reasonable amount of money if they ever released a second season of Elfen Lied or a fourth season of Maria-sama ga Miteru.

However I must say that there would be stipulations on what I would pay for and how much I would pay.  I would probably consider paying at most $60 for a limited edition DVD of either set (Elfen Lied or Maria-sama) if it came with a decent amount of extras.  I mean non-disc extras.  I would want a plushie, (I would take a Lucy/Nyu plushie in a heartbeat), figurine wouldn’t be bad, stickers, manga volume, etc. If it was just the DVD I would pay around $40.

Let me get this out of the way first, I am a subs watcher I have heard enough bad dubs that I prefer subs over dubs.  Now do I completely disregard dubs, no I still see a few every now and then, but if I had a preference it would be subs.  (By bad dubs I mean Elfen Lied and Ikkitousen to name two)  However, even though I prefer subs I would not pay $30 for a DVD of four or five episodes of subs.  Which is what some companies now are doing to cut costs.

It does not make sense to me, I know that the American anime industry isn’t doing very good right now, but why in the heck would I pay $30 for something that many people make for free?  I mean I know they have the license so legally you would have to buy it if you wanted to see it, but this is just ridiculous when professional companies want to do this in my opinion.  Put a subtitle track on it maybe an extra like a character biography or something, some artwork on the case and there you have a $30 DVD.

It may seem like I’m contradicting myself some since I just said I really only watch subs, but I will not pay $30 for a subtitle track.  If you put a dub on there I could see that because you put way more time and resources into it so I could see myself paying more and rightfully so because you have done a complete job in localizing it for your selected region so they should own rights to that.  I understand paying more for limited editions with all the extras, (although some of Bandai’s $80 DVD’s are pushing it) I see myself paying more money for full seasons, but not just for subtitles.

I know that the price has gone way down as compared to earlier years, and your ability to find anime is just a click a way or a drive away.  The cost of licensing fees has gone way up and I can see that as being a main reason for them trying to cut other costs as much as possible and still make some profit.  However, maybe some companies (Funimation) could slow down a little bit and not license everything under the sun that lately has been coming out.

It’s just my opinion though of seeing people pay $30 for subtitles, I may be a minoirity in the industry but that’s just me.  What do you guys think?  On average what would you pay for sub only DVD’s.  Let’s say one DVD of a series with four episodes.  The series is a middle ground for you, you don’t hate but you don’t turn into a fanboy/fangirl over hearing the name of the series.  What would you pay let me know.  I would pay around  $10-15 just to let you know.

Tonight I talk about one of the more recent staple genres in the industry.  The Harem anime where one seemingly normal high school male is the center of affection from at least five main attractive women.  This one genre is responsible for more eye rolls by women viewers, and probably more male viewers watch them than what would probably admit in forums.  It is called the male fantasy of anime, and the word fantasy could probably not describe a genre better because they possibly could not be anything  but fantasy.  I’m going to look at several harem anime problems f and discuss why this is something of pure fantasy.

I have seen quite a few harem shows since I started watching anime, because I think the genre is hilarious and I find it to be somewhat intriguing to find out what antics they throw out to us next.  Although how popular they are is somewhat disturbing due to the frequency they release them.  Although half of the time I find I’m telling myself “yeah right…” to half of the details that lay the possibility of having five girls always surrounding one guy. 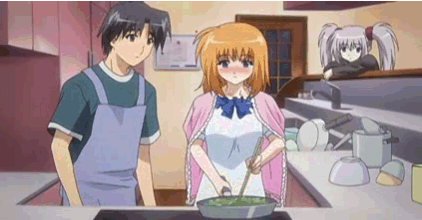 Kaede and Rin cooking. Her dad is on year long business trip

6. The first detail is the mysterious absence of parents at all times.  Now let me get this out of the way because I know their are exceptions like the Key Animation shows like Kanon, AIR TV and Clannad but nearly all of the shows the main guy and girl character have no parents at all.  Now some shows go about by explaining like some tragic accident, a year long business trip or something of the sort.  No parents at all and you have a girl living with you because she doesn’t have parents either.

5. The next one is one of my favorites.  The main character has always been living with a younger (or portrayed as younger) sister who is not really his sister at all because she’s not blood related however they have been together for the past ten years, and they even see each other as siblings….until those hormones start flowing. (Da Capo Anyone?)

4. Next the girl who seems to be the “main” girl of the series always has had some tragic event happen to her in her past usually dealing with the main male character.  She’s like a Martha Stewart that is always happy and cheerful and willing to do anything, but four years ago there was a fire and her house and family perished, or a car accident, or she was really sick at one time and almost died.

3.  The mysterious ability of having all finances paid.  These high school kids attend school, don’t work and somehow they are able always have money for meals that usually include ALL FIVE girls, field trips to the beach, camping, etc.  Where do they get their money from? I want to know.

2. The girls seem to get along just fine while all five are rabidly competing over a the same guy.  They all want him they all know that and somehow instead of one knifing the other they all get along and understand that they all love him and each girl should get their own chance without interference from the others.  Yeah right like they won’t get jealous of each other.

1. The main one and is often the whole reason why the harem genre is considered to be the favorite anime series of “That Guy” you know the stereotypical guy that everyone believes watches anime, greasy long hair, glasses, overweight, bad hygiene, no social skills etc. is the the horde of five teen beauties flocking over a normal guy for no reason except maybe he’s nice.  The most hilarious being all the girls would rather be single if they couldn’t go out with the main character.

Yes I know it was six reasons which is odd number but I figured it was okay.  What do you guys think of the harem genre useless genre full of fanservice, genre that has had some funny shows but is growing stale? Let me know

Hello anime and gaming fans alike. I started this blog to share news, information, and my opinions and thoughts about anime and video games mainly, as well as to talk and blog with other people who share similar interests to me. I am 19 years old I attend Oklahoma State University and I am a MSIS major.

I’m also a member of anime-eden forums and you can add me as a friend as well. Just do the same thing as the gametrailers site and let me know you know about my blog by sending me a message.